Home > Blog > Gynecomastia 101: Find out More About this Condition 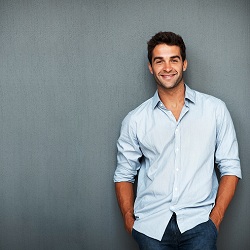 Gynecomastia, is a condition that occurs when glandular tissue in the male breasts become enlarged. It is colloquially referred to as man boobs. It is a condition that commonly occurs in young male teens when they hit puberty. Sometimes male newborns have them too, as their mother’s hormones stay with them for a while.

In some cases, however, a lot of middle aged men find themselves with this condition, every 1 in 4 men, to be precise. It is to be noted that it is not the same as lipomastia which is caused by fat deposits and not glandular enlargement.

Gynecomastia is essentially caused by an hormonal imbalance where there might be an excess of estrogen and other female hormones. For newborns, it can last a few days and for most teenagers, just during the time when their body tries to adjust to the hormonal changes at the time when they hit puberty. Usually for teenagers, it can last up to a maximum of three years; however, if the breasts grow more than 4 cm in diameter, they are unlikely to regress.

For middle-aged to older men, the causes may be different. Aging plays a big role in changing hormonal levels, and as a result males may develop large breast. In addition to hormonal changes, some medicines, excessive alcohol consumption, and drug abuse can cause it as well.

The following drugs are known to contribute to gynecomastia:

Gynecomastia can also be caused by certain illnesses such as:

In addition to health conditions and medication gynecomastia can also be caused by poor lifestyle habits, including lack of exercise and a bad diet, tea tree oil, and lavender in soaps and lotions.

What Are The Symptoms?

In addition to the breasts increasing in size, other symptoms include:

• Nipple discharge
• Tenderness and pain in the region
• Firm, rubbery feeling under the nipples

Having gynecomastia is not harmful and many men live with the condition. It can, however, be frustrating to deal with on a daily basis and cause you to feel incredibly insecure. It can lead to poor confidence levels and adversely effect different aspects of your life. It is not physically harmful, but it could be an indicator of some underlying issue such as testicular cancer. The growth of the breasts may make the area feel tender and painful in some cases.

How Can It Be Treated?

In many cases, the condition may disappear on its own. However, if the hormonal imbalance is caused to due to illnesses or medication, the process of regression may be slow or non-existent. In these situations, treatment is required. While medication may be able to decrease the size by some degree, if the breasts have grown too large, surgery may be required.

If nothing makes your large breast reduce in size and you are bothered by it, there are a few surgical options that can be considered. Liposuction to remove the fat and if need be, endoscopic mastectomy. The latter removes the gland through small incisions made on the breasts.

Gynecomastia is a very common problem that a great deal of men face so don’t be bogged down by it. It is usually a temporary problem, but if it persists, it is very easily treatable. During a consultation with double-board-certified plastic surgeon, Dr. Tim Sayed, you can learn more about the treatment options available to you. Contact us to schedule one today!